Skip to content
THE TRUTH IS, WE HAD NO IDEA what to expect in the coming few days.  My (business) partner and I had just spent a few pretty cushy but intense days in San Antonio connecting with friends, learning various things about the city’s history and culture, and meeting more than a fair few  quirky and cool characters along the way.  San Antonio had been an unexpected and welcome stop on the journey, but it was time to get back to The Mission and we were about to embark on our first “stage.” The term “stage” (or trail, or shadow as it’s sometimes called) dates back a long time and sadly seems to be falling out of current restaurant parlance and practice, but “stage” is basically a fancy french term for working in a restaurant for free in exchange for experience (and usually a meal).
Late that morning we’d had what we both thought was a superlative visit to 2M Smokehouse,  a fantastic roadside spot housed in two low, pretty nondescript buildings on the East side of San Antonio (you can see L.R.’s thoughts on the experience here if you haven’t read about our first week on the road yet).  With that under our belts we pointed the truck towards Mathis TX, a town in south-central Texas of about 5,000 souls that also happens to the the home of Butter’s BBQ.  Butter’s is the brainchild and passion project of Andrew “Butter” Soto, who’s born and raised in Mathis.  Before we’d left Colorado L.R. had listened to a podcast interview with Andrew and was struck by his authenticity (vulnerability, even) and his passion, and  he decided to reach out and ask Andrew if we could hang and cook with him for a few days during our trip.  He pretty much immediately said yes.*
Apart from where it appears on a map, we knew very, very little else about Mathis before we pulled into town and made our way to Butter’s.  At first glance it seems like any other small town sitting in the middle of nowwhere, but turns out that it’s something of a crossroads town with a history tied up in everything from early railroad expansion to the Mexican/American war (for a while, the Nueces river was actually the US/Mexico border before it was pushed back to the Rio Grande).  Today it’s a pretty tough little town – “a lot of poverty or near-poverty” as Andrew tells it, and it’s one of the reasons he’s so passionate and committed to bringing his take on craft barbecue to the people he grew up with and lives with today. 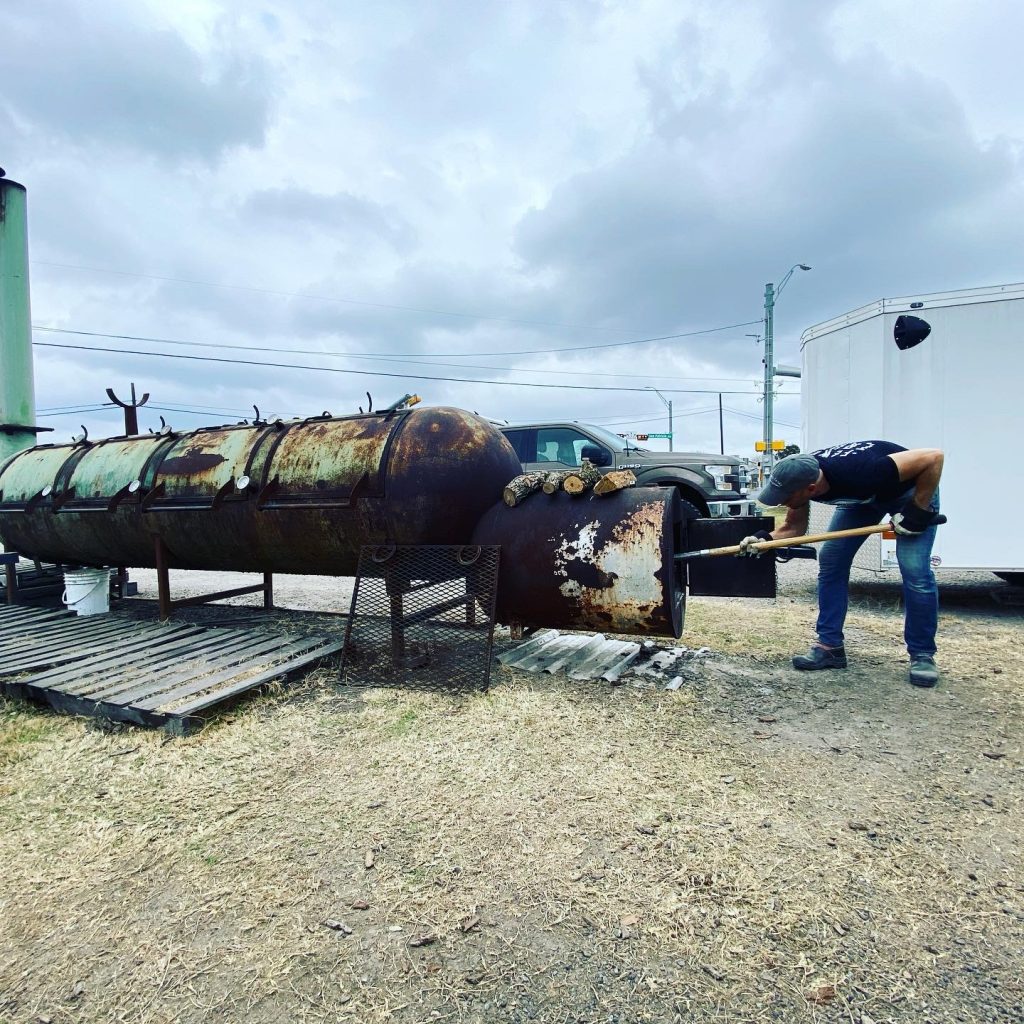 Directly outside the patio doors are the smokers; two of them, a custom-built 500-gallon offset smoker and a 1000-gallon offset made by Primitive, a pit fabricator out of Georgia.  It’s hard to explain this to someone who’s possibly (okay, almost certainly) not quite as into this kind of thing as we are but these things…. are… pretty dead sexy.  Sexy in a rusty-reclaimed-industrial-design kind of way, but just absolutely sexy (see the “note on offset smokers” for more about these things).   This was what we’d been looking forward to and it was here, finally – the chance to spend a few days learning at the elbow of a couple of craftsmen, running these legit, commercial-scale pits with two guys who’ve been absolutely crushing it together for the past four years.
(It’s appropriate at this point to reveal that Butter’s was recognized as one of Texas’ top 25 new barbecue spots by Daniel Vaughan at Texas Monthly magazine.  Daniel is pretty much the one-man Michelin Guide for barbecue in Texas and he’s known for being brutally honest with pitmasters about their product;  takes more than good looks and a firm handshake to make it onto his list.)
Most of our time was going to be spent working with Andrew and his pitmaster, Robert (who goes by the fairly sweet handle @robertrodriguez6banger on IG).  Andrew was going to be away from the restaurant when we arrived, so he’d told us to look for Robert when we arrived and we found him pretty quickly.  And he got us to work pretty quickly as well, providing us with lengthy and thorough explanations of exactly what was going on and why.  Andrew showed up a few hours later (he tends to take the p.m. shift) and by that time Robert had us checking fires, raking coals, and spritzing and shifting briskets around as necessary.  Robert’s been with Andrew since the day they opened, and Robert tells a pretty funny story about learning on the job via instructional text messages from Andrew while cooking  (Andrew was in the middle of serving his two week notice at the get-me-the-hell-out-of-here job he’d just quit).
Our first moments with Andrew set the tone for what would become the rest of the weekend; no such thing as a stupid question, no topic was off-limits and was basically willing to give us as much rope as we asked for, short of being able to hang ourselves with it.  Having heard that his brother makes the sausages for the restaurant (which are some of the best we’ve had on this trip), I asked whether we could spend a little time with him.  Just so happened that he was casing the sausage that afternoon, and an hour later we were standing next to his brother Balentin learning about grinding, mixing, casing, and sausage seasoning/philosophy as a whole. And not an hour after that, Andrew decided he trusted the two of us enough to tend the smoker for a couple of hours while he was gone.  So just like that, we’re standing in the middle of Mathis, TX, tending the next day’s briskets (read: revenue), alone.  It had a very Alice in Wonderland, rabbit-hole-meets-rural-Texas quality to it, to put it mildly, complete with an actual can-you-believe-this moment looking at each other after Andrew pulled away.
The next two days were more of the same; Friday was a 16-hour day working both ends of the shift, starting at 5:30 that morning (this was eye-opening day on a different level, no pun intended), learning ribs, turkey, sausage and barbacoa (comes from beef cheeks when it’s the real thing). Saturday was more of the same until about mid-afternoon, when we were getting ready to leave.  But before we left, Andrew treated us to a plate of the food we’d been cooking with him and Robert, and it was truly a special moment to sit down with him for a minute over his food and reflect on the past few days.  His dad even joined us for a minute or two, and the whole occasion was more than a little emotional. 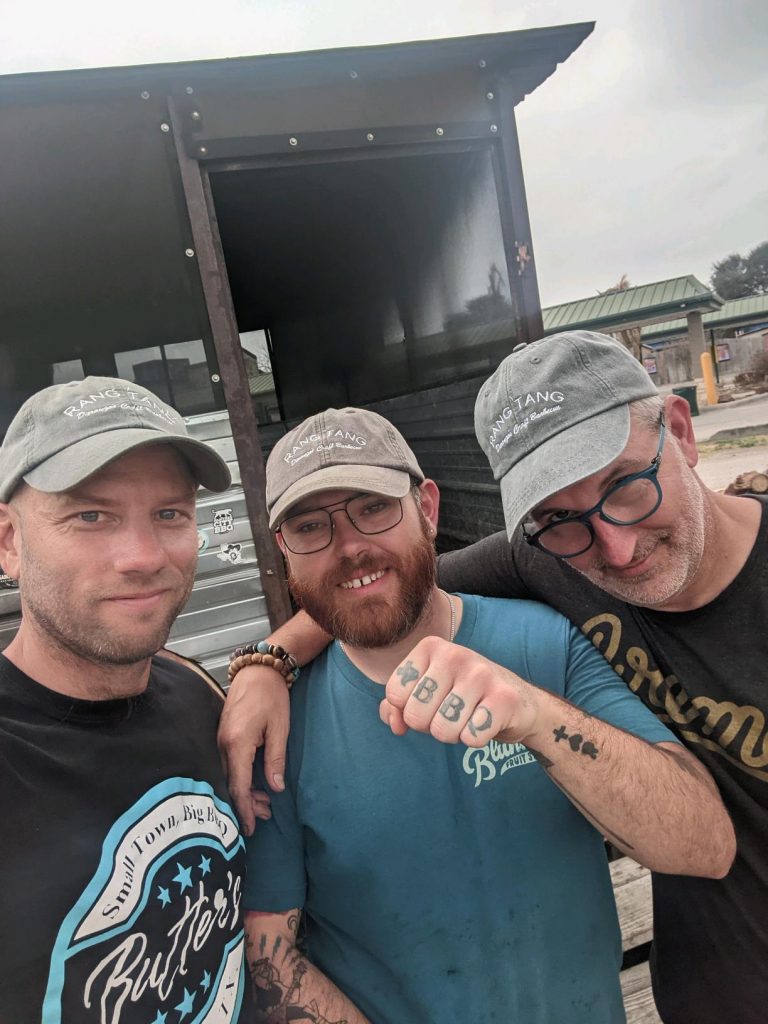 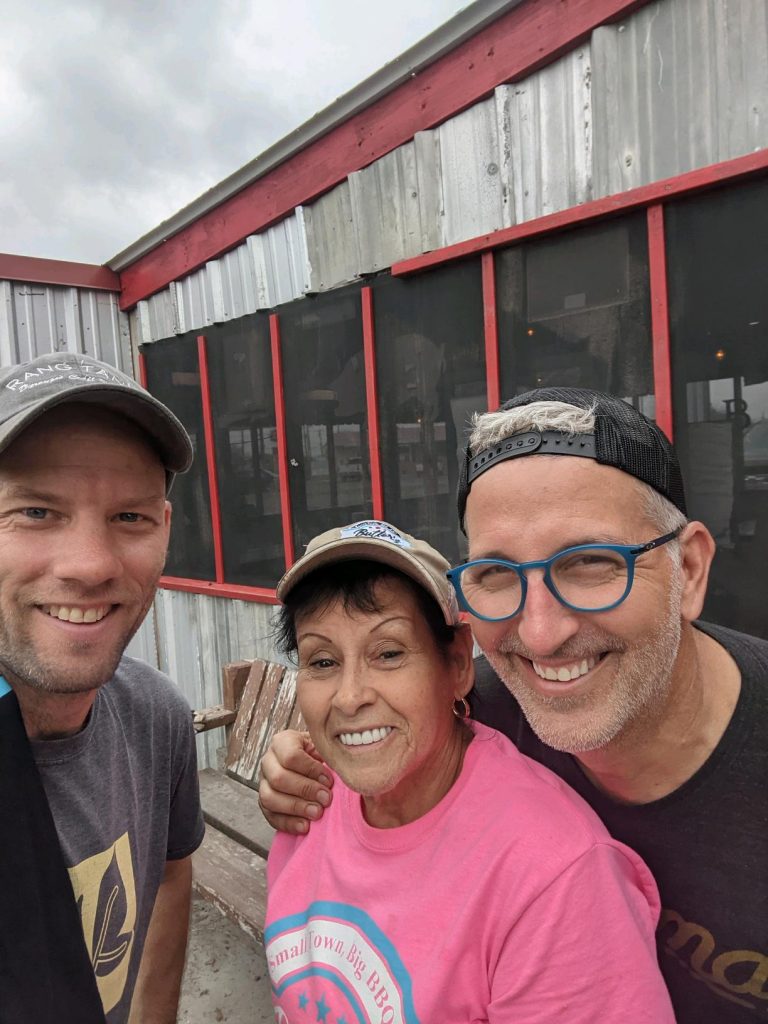 And with that, we packed up and headed down the road.  Couldn’t be happier that Butter’s was our first working stop on this trip. I can’t imagine a better spot for us to have landed, nor with a better guy and his family.  And it’s kind of a fun and a happy point of pride that we were Andrew’s first cooks to come and trail at his place. Given that he invited us back to cook with him any weekend (kidding not kidding, as he put it), seems like the love is mutual – I’m sure we’ll be back.
Cheers –
Andy (and L.R.)
*Since our time cooking with Andrew and his family, he’s become a friend and actually came to meet us in Houston later in our trip to eat at a few barbecue spots.  We managed to get him to record a podcast with us (watch this space) and during our conversation he admitted that he was pretty stunned that just about anyone in their right mind would willingly come to Mathis for three days and spend time cooking with him.

A note on offset smokers

Most all of the places we’ve been visiting on this trip use what’s known as an “offset smoker,” and it’s the style of smoker we’ll use when we start selling food. They’re called “offset” because the firebox (where the wood goes, and the fire is lit and maintained) is offset from the cooking chamber when they’re welded together, creating enough of a gap for air and warm smoke to move through the cooking chamber without exposing your food to the intense heat that the  hard wood creates – which would fry the outside of your brisket well before the inside gets the chance to do its magic.  The smokers we worked with at Butter’s began life as propane tanks somewhere on the plains of Texas, probably in someone’s yard producing electricity for the house.  As more and more rural areas get connected to the central power grid, more and more of these tanks aren’t needed for their original purpose.  I suspect a lot of them just sit out behind houses or in fields (apparently the propane companies often don’t want them back) but more than a few of them are making their way into specialty welding shops to be converted into gorgeous and unique commercial smokers. Check out www.mobergsmokers.com or www.millscale.co  – they’re next-level. 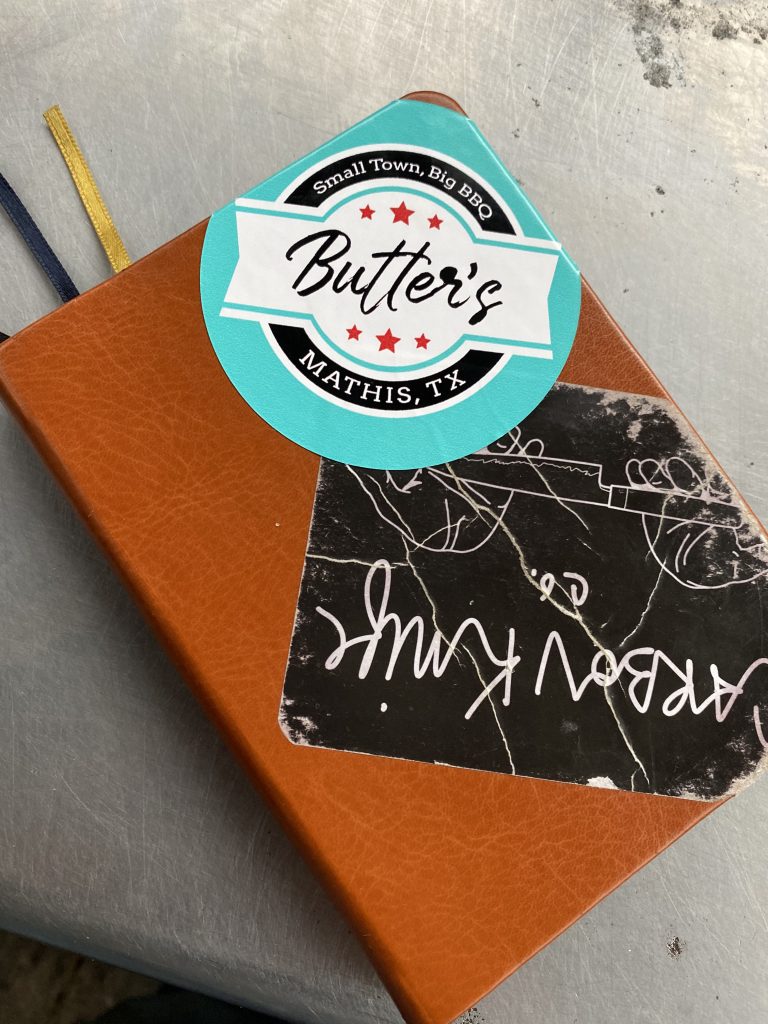 Press your nose against the window

We may not have a physical space yet, but you can still take a peek at what we’re up to.  Rang Tang’s email friends are the first to know when we’re cooking, and we’ll keep you updated on our progress towards regular service.

We’re dedicated to changing our food system one delicious meal at a time.  When you eat with us you’re helping too